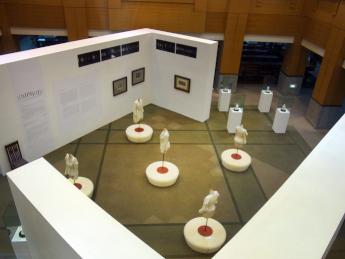 Based on the unique forms of our collection of German-made plaster models of three-dimensional functions, this Mode & Science project aims at transferring these diverse curvatures in the realm of clothing. This is an expanded Mobilemuseum version of the eponymous exhibition held at the Koishikawa Annex in October 2010, on the theme of the morphology, functions and movements of the human body.

In order to promote the development of education and research as well as to encourage mutual exchange, the National Taiwan University and the University Museum, the University of Tokyo (National University Corporation), are presently organizing the University of Tokyo Mobilemuseum “Anthropometria” exhibition, under  The University Museum, the University of Tokyo, has collectively designated the six million academic specimens stored at the university campus as "the Collection of The University of Tokyo", and has been organizing a series of special exhibitions every year in order to present and thereby return these specimens to society.
The present exhibition is an expanded version, comprising additional items, of an exhibition initially held during three days in the fall of 2010 at the University Museum’s Koishikawa Annex, in the context of our “Mode & Science” series.
Not only do the University Museum’s exhibitions present to the public the academic results of advanced and specialized research, but they also incite visitors to take pleasure in seeing and knowing within the transdisciplinary framework of “Art & Science”, crossing the traditional academic partitions resulting from the development and specialization of each discipline. Through the fusion of mathematical science governed by abstract concepts and fashion design supported by artisanal techniques, the present exhibition sheds light on a new way of seeing things, in relationship with the problem of apprehending how human bodies, forms and movements come and go between two-dimensional and three-dimensional spaces.
Finally, our words of deep gratitude go to our partners from the National Taiwan University who created the opportunity to realize the present exhibition, and especially to Professor Lin of NTU Museums, as well as to her staff.