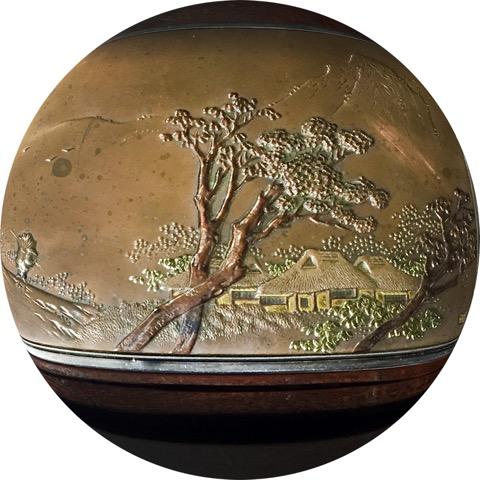 On the occasion of the symposium "Pio-engineers in Modern Japan" (November 17, 2018) which focuses on the development of Japanese Engineering, we exhibit Watanabe Kaichi’s memorial silver box. Watanabe, who is known as the Father of Japanese Civil Engineering History, left an important footprint as a modern Japanese engineer.
Watanabe Kaichi (1858-1932) studied at the Faculty of Civil Engineering, the Imperial College of Engineering, which is one of the former institutions of the Faculty of Engineering, the University of Tokyo. He graduated in 1883 from college, first in his year. After his graduation, he entered Japan’s Public Works as an engineer and worked at the Railway Bureau. In 1884, he resigned from the Public Works to study at the University of Glasgow in Scotland, and majoring in civil engineering there as well. Upon graduating in 1886, he was taken on as an engineer by the office of Sir John Fowler and Sir Benjamin Baker, who had undertaken numerous large-scale projects in the UK construction industry. There, he served as a construction supervisor of the Forth Bridge, known in the 19th century as a particularly difficult project. The Forth Bridge, completed in 1890 after a eight-year long construction, is a railway iron bridge with a total length of 2,529 m over the Firth of Forth, in the north of Edinburgh. The bridge introduced a new cantilever type design. Watanabe appears in the center of the photograph of the human model, which is indispensable when illustrating the principle of the cantilever applied at the Forth. This photograph is well-known as it is used for the design of Scottish 20 Pound notes issued in 2007. The Forth Bridge was registered to the UNESCO World Heritage List in 2015 because of its value as a historical industrial heritage.
Watanabe left Scotland two years before the completion of construction and returned to Japan, as his knowledge and skills as well as his experiences cultivated in Scotland were needed here. He contributed to the early railway constructions in Japan, participated in the establishment of the Japan Society of Civil Engineers, and served as president of various companies, working extensively not only in the railway industry but also in the academy and other industries.
The history of this silver box is known from the engraving on its bottom face. Watanabe as the first president of Toyo Denki Seizo K.K. made a technical alliance for the establishment of the company, with the world-renowned electronics manufacturer Dick Kerr & Co. Ltd. which was founded in 1854 in Glasgow. In 1918, he presented the box as a memorial gift for the establishment of Toyo Denki Seizo K.K., addressed to Mr. Walter Rutherford, executive officer of Dick Kerr & Co. Ltd. Toyo Denki Seizo K.K. succeeded in domesticizing the main railway electrical equipment, which had been dependent on the import of foreign products until that time, and made a significant contribution to the development of Japan as a specialized manufacturer. This box was made by Miyamoto Shōkō (founded in 1880) who worked on the productions and sales of high-quality silver gifts such as tobacco containers and inlays for foreigners. The lid part of the box bears the inscription and metalwork of Takeda Takeyoshi, a metal sculptor. Takeda was active at Takaoka in Toyama and some of his craft works are collected in Takaoka Art Museum. From the polite appearance of this Japanese traditional craftwork depicting a person walking in a rural mountain landscape with a bunch of Shiba plants on his back, Watanabe’s appreciation of Scotland and its importance in his process as a Japanese engineer can be felt.
This silver box, acquired several years ago in an auction in the UK by Ms. Alexandra Oglethorpe, has returned to Japan exactly 100 years after the date of its engraving, in order to be exhibited here. This special presentation at the Intermediatheque was realized with the generosity of Ms. Alexandra and Mr. Charles Oglethorpe. On this occasion, we also exhibit newly acquired drawing instruments of the Imperial College of Engineering.