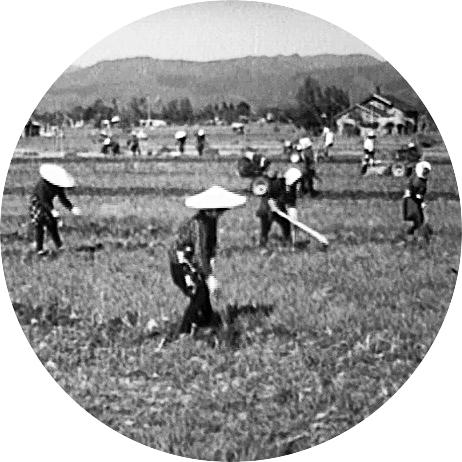 Date & Time: Friday, May 6, 2016 6:30 p.m. (expected to end at 7:30 p.m.)
Venue: Intermediatheque 2F Lecture Theatre ACADEMIA
Admission free (no reservation required)
Language: Japanese (no subtitles)
The number of seats limited to 48. We request your comprehension.
* Photographing, filming and recording are strictly prohibited.
* Please refrain from eating and drinking in the museum.

A major rice-producing region, Akita and Yamagata prefectures faced major issues in their modernization throughout the 1950s. As the era of rice monoculture as a central pillar of the local economy faded away, and with the introduction of free trade and the modification in the government’s price guarantee system for rice-growing, both prefectures underwent a reconsideration of their traditional identity. While focusing on this still topical social issue, the present screening draws a portrait of the Showa-era peasants who embodied the culture of rice in the Tohoku region.