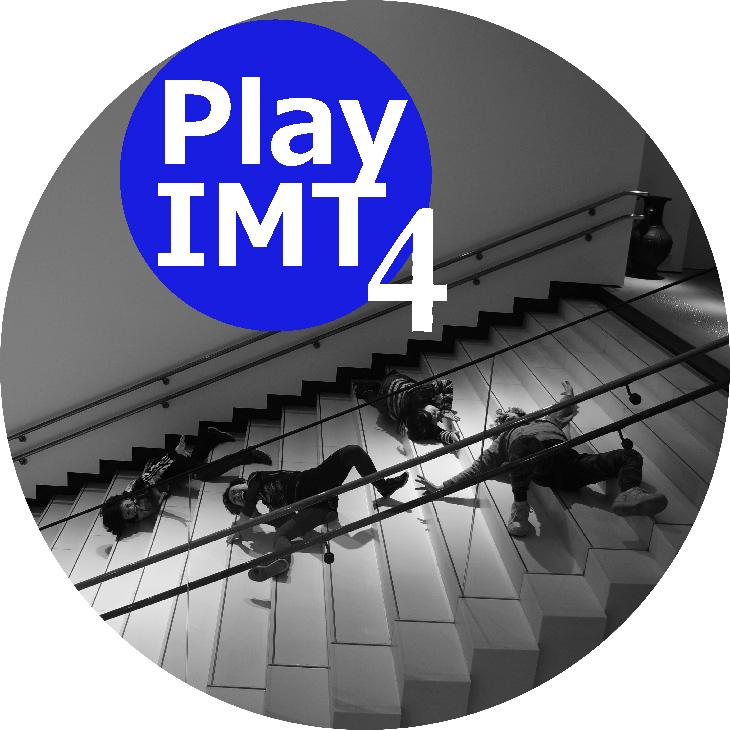 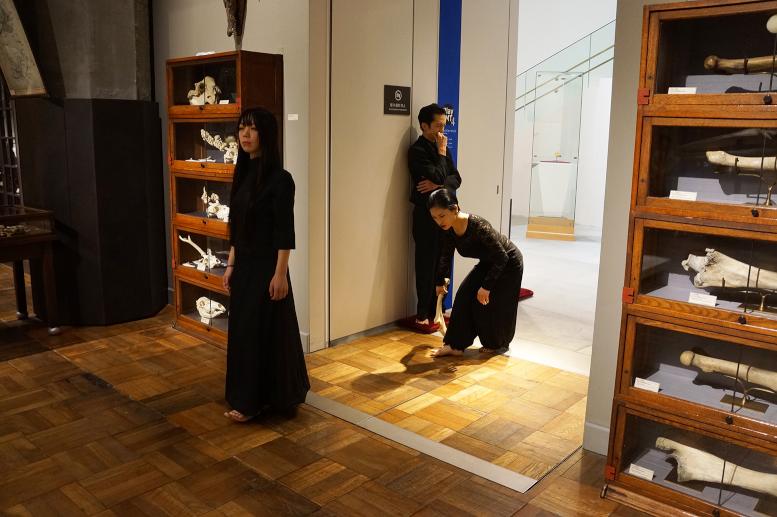 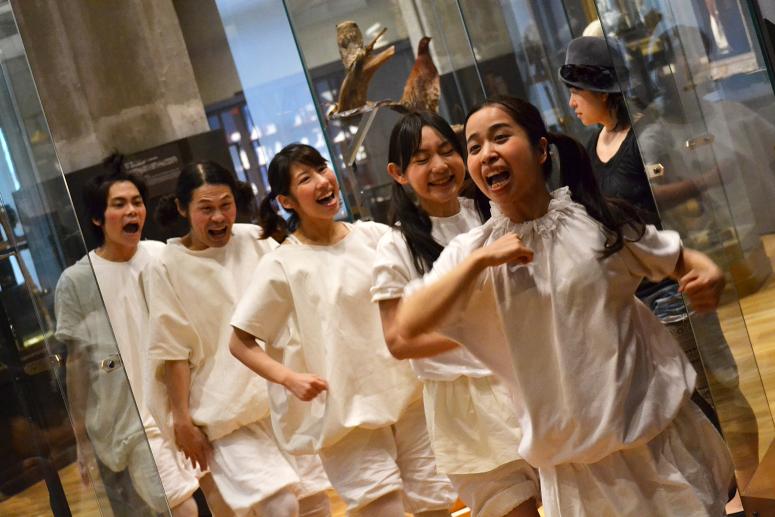 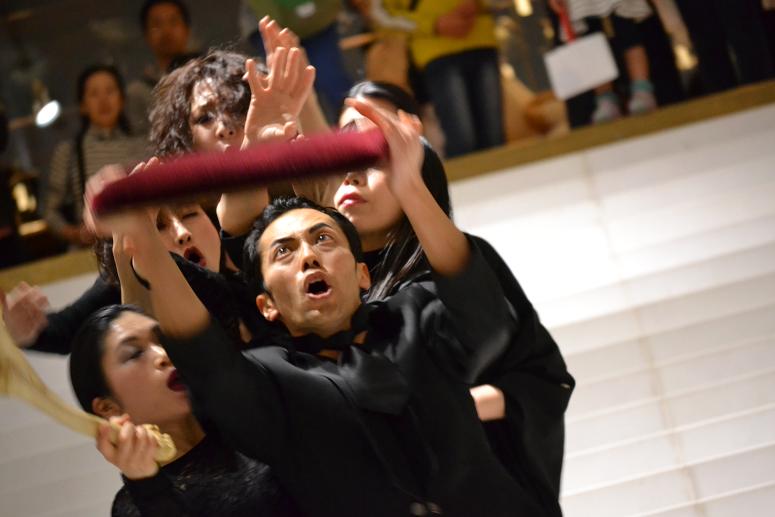 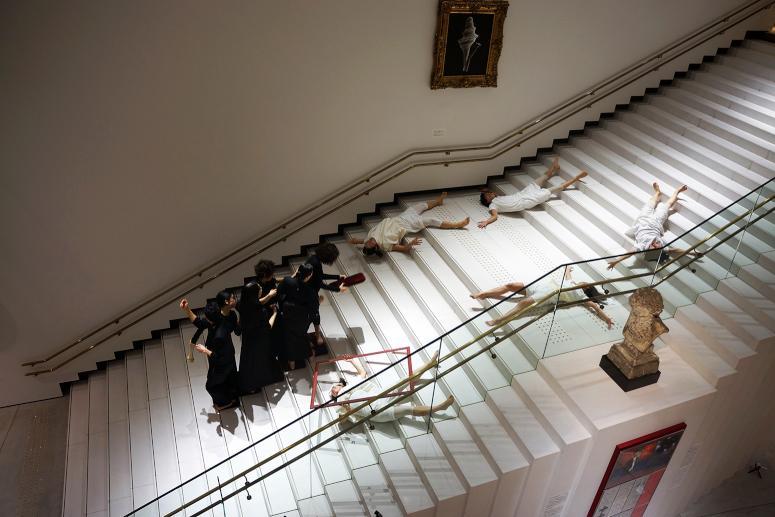 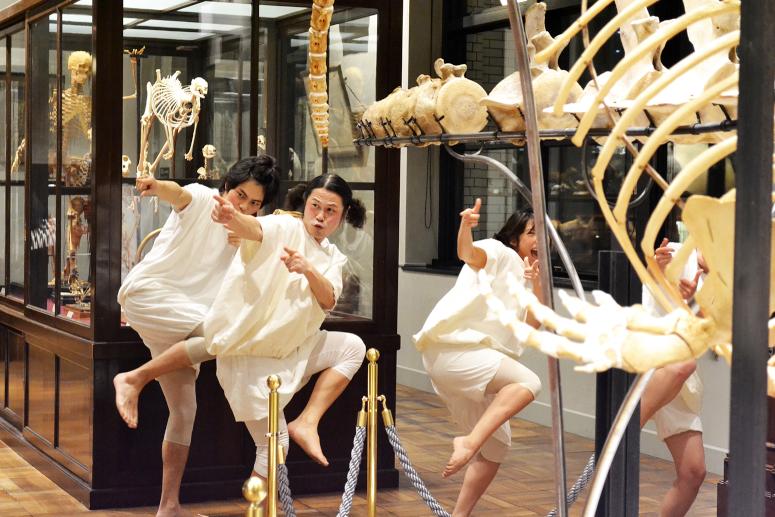 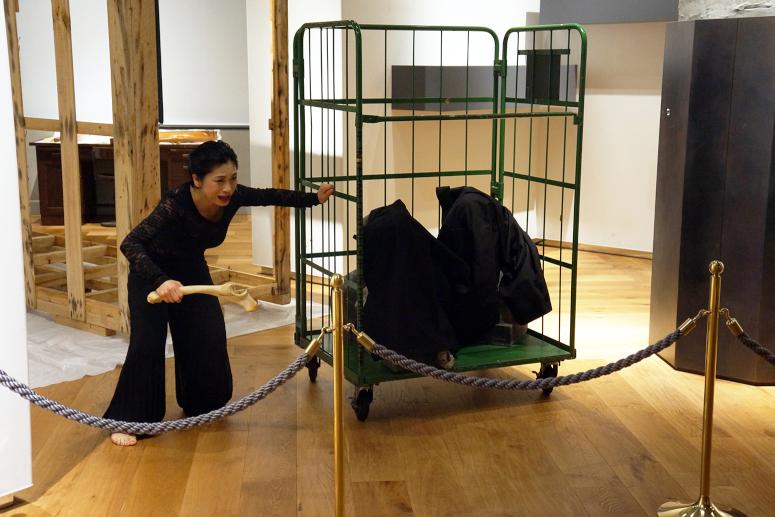 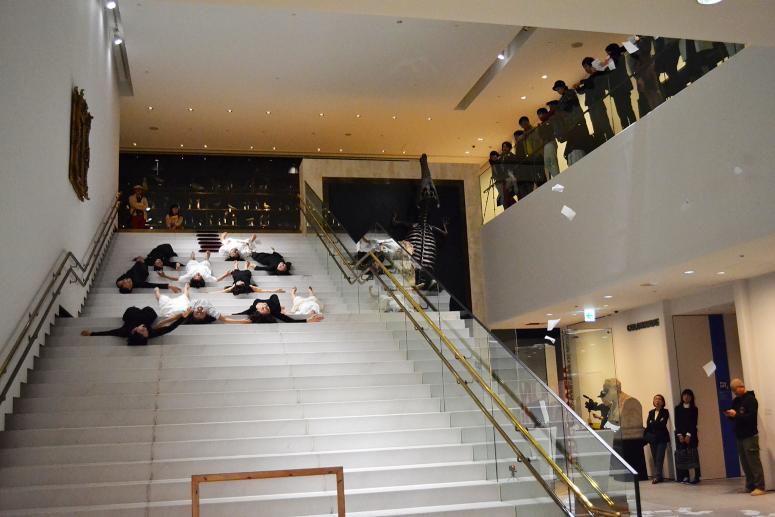 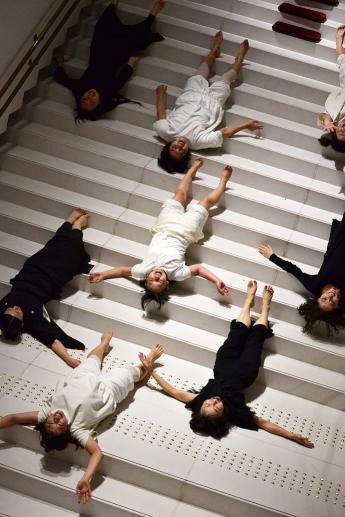 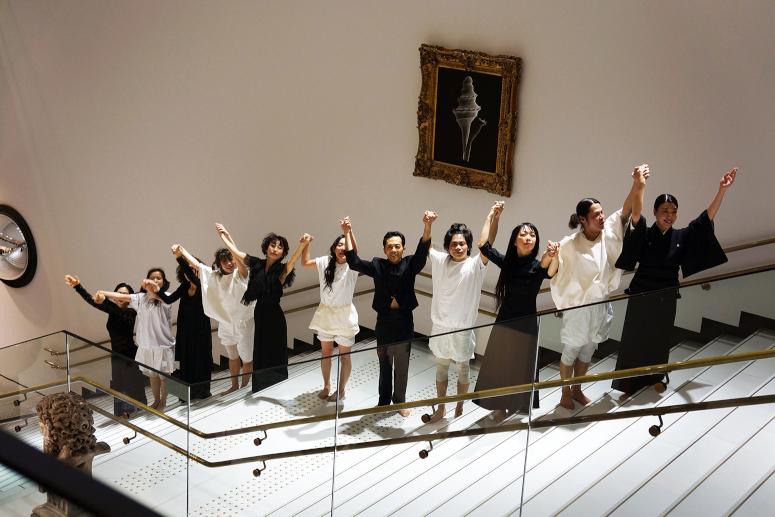 The PDF version of the web catalogue is published here.

The Men in Black are standing, their expressions unreadable, but they are frustrated. Their limitless desires have not been met.
One by one, the Men in Black start moving. Trying to obtain what they seek, they roam COLONNADE2. Day after day, they toil endlessly, repeatedly in this manner.
The world in which they live in, if we have to qualify it, is the realm of Earth. Animal specimens, living creatures that have stopped breathing intermingle with the Men in Black: from fish and monkeys, to the snakes that slithered upon land, and the dolphins that swam the sea.
Sometimes, the Men in Black hold visitors captive, only to try to force out their frustrations. It may only be seen as such, that they play and trifle as they please.

The Men in Black continue to wander as though they were crawling the earth. No matter how much they sigh, they will not acquire what they desire here. Their unsatisfied wants are like an unquenchable thirst, a lonely, deep darkness.
Their desires only keep increasing. The Men in Black’s cries reverberate throughout COLONNADE2. They are like Salome who desires the head of John, like the noble women who want it all, like the knights who thirst for only the highest honour.
Between the walls of COLONNADE2, one vaguely sees a “window.” There, something white is falling. Something the Men in Black have never before seen – the Men in White’s paper airplanes.
The Men in Black now realize that above them lies an unknown world, and one by one they leave COLONNADE2, headed to take on this world they have yet to know.

The Men in Black desperately seek a way up the stairs. To leave their territory for the unknown, it seems too vulnerable for them to walk barefoot.
With the same purpose in mind, a sense of solidarity between them is borne, and in that brief moment they are relieved of their loneliness.
The Men in Black come across boards covered in red cloth. These will now help them ascend the stairs. There are exactly as many boards as there are people. As they spread out upon the steps, each board is handed from below, and one by one as they climb. Only when they finish this task will they finally reach that world above.
The Men in White, too, cannot suppress their curiosity about the world below. They discover a frame at the top of the stairs, the opening to the world below.
Peeking through the frame, a world never before seen expands below. Even the fearful cannot help but want to look.
Just to take a look, that is all. But at this moment, someone falls suddenly through the frame, and slowly slides down the stairs.
Those who have seen this come forward to help their friend – or rather, they themselves succumb to curiosity as well, and one by one dive into the depths beneath the frame. Just like that, they slowly slide down the stairs, and as their pure laughter fills the air, they are born into a new world.
In the middle of the steps, the Men in Black and the Men in White cross paths, and yet they remain unaware of each other’s presence. The Men in Black take simple, repetitive steps up in a daze, and the Men in White slide down, entranced in this new form of play.

The Men in White have reached the bottom of the stairs. It is a place they had already seen, but the first step into a new world is still daunting. Using visitors who happen to be there as a shield, they proceed hidden.
However, once they spread out in COLONNADE2’s exhibition space, they begin to move without hesitation, as though without even the slightest fear, and a sense of exaltation spreads over the entire area.
Almost immediately, the Men in White turn this new world into their playground, and as always, they begin to play. As always, unfamiliar people and unknown exhibits become playmates. The heavy air of the Earth turns into the light wind of Heaven.

●SCENE 4 – BLACK / The Men in Black’s Frustrations, Once More

The Men in Black have arrived at the top of the stairs. Taking in this new world, they dash out with joy, as if they had become children again.
Once more, however, they become tortured by their desires. No matter how hard they search, their desires continue to elude them, even in this new world. In the end, their act of searching and pursuing remains unchanged.
Despair strikes the Men in Black. They were supposed to have come to Heaven, but in the end can only crawl the Earth. Their sobs of grief echoes through COLONNADE3.

The Men in Black Men are in grief. No longer can they remain in this world, a world of despair.
Guided by what sounds like sorrowful tunes, the Men in Black begin to gather. They start walking in a straight line. It seems they do little else but return to their own world.
Ploddingly, they reach the stairs. At the bottom of the stairs, life will again go on as usual, on constant, relentless repeat.

The Men in White continue playing. In the end, however, they will not stay in this world. No matter where, it will be the same – the Men in White’s playground.
Voices are heard from somewhere – the laments of the Men in Black above.
Despite being in completely different worlds, something is happening to both groups of people. What should not have been heard can now be heard.
The Men in White still do not understand what it is they hear, but still cannot help but listen. As though drawn along by the voices, they began to run.

The Men in White grasp the direction where the voices come from, and discover the Men in Black at the top of the stairs.
The Men in White begin to call out, and are finally seen by the Men in Black. Now they finally meet for the first time, and a different energy begins to pulsate.
The Men in White turn towards the Men in Black, and begin to spread their energy. A fun, joyful energy rises up from below.
The Men in Black receive that energy, and their own energy, so full of grief and anger, gradually dissipates.
As though being drawn in unaware, the Men in Black begin their slide down the stairs, smiles all over their faces as they are purified and soothed by an easy, comfortable rhythm.
The Men in White leap up and down as though stirring up this rhythm for the first time, but soon become adjusted to it.
They lay down quietly, with smiling faces, and together with the Men in Black, they too begin their slide down. It seems as though they are born into a new world.
Pieces of white paper flutter to the floor below, thrown by visitors gathered on the balcony. Like snow falling from the sky, they dance through the air as they fall.
The sound of waves is heard. Whether for the haves or the have-nots, for the philosopher or the fool, for the angel or the devil, for those who watch or those being watched – it is a calm, gentle time for all.
Flowing through this space, is the time for play.

Supervision of the Intermediatheque:
Yoshiaki Nishino

The actor’s origins are as priestesses.
Priestesses are the medium between God and Man.
They entrust Man’s hopes and wishes to God.
They convey God’s meaning to Man.
They disguise themselves as Man,
As beast, as nature, as deity.
With their bodies and their voices they play
And Man’s worry and sadness they take away.

Even today, the actor’s work remains unchanged.
He performs Life and its relationships,
Beasts and nature,
The ways of this world.
With his body and his voice he plays
And the audience’s worry and sadness he takes away.

Today, Intermediatheque is the playground where actors play.
With their bodies, with their voices,
With this space, with their audience,
They play.
And so for you who have come to their playground,
They will join you with the gods above.

“To play with exhibits, to play within the exhibition space, to play with visitors.” The Dutch historian Johan Huizinga, in Homo Ludens, and the French sociologist Roger Caillois in his influential book Man, Play and Games both argue that “playing” is man’s fundamental freedom – to be at play, is to be free. Today’s museums, however, seem to be spaces constrained by rules and limitations – visitors must not touch the exhibits, must not run about or cause nuisance. Yet should a museum not be a place where exhibits are freely viewed – the visitor’s playground? Or is it where we can do little else but gaze silently, passively at still objects? Is it so difficult to play freely at museum?

At Intermediatheque, our actors have been given “permission” to play, to do what might be “not allowed.” However, while their bodies have been specially trained for performance, in reality these actors are not so different from visitors like you and I. Their freely moving physical performances therefore show that the museum is not just a place with books, paintings and impersonal technology. Rather, it is a place where we, like the actors, by calling upon our bodies and our imagination, can play. One might treat their performance as something out of the ordinary, outside of daily life. But perhaps this might inspire one to think, even just a little: “To what extent will you be able to experience, with both mind and body, where your imagination takes you? To what extent have you been able to play?”


Theatrical creation project “Play IMT”
The University Museum, the University of Tokyo and SEAMI collaborate on a theatrical project staged at the JP Tower Museum INTERMEDIATHEQUE. This project is an experiment on theatrical creation within a museum space. While pursuing new possibilities for creative activities in relation to the scientific specimens and museum space proper to the Intermediatheque, we attempt to give birth to new forms of theatrical expression. In this context, and in order to build up the process of theatrical creation in a public form, we regularly hold related events at the Intermediatheque, with all the meanings of “play” as our keyword.