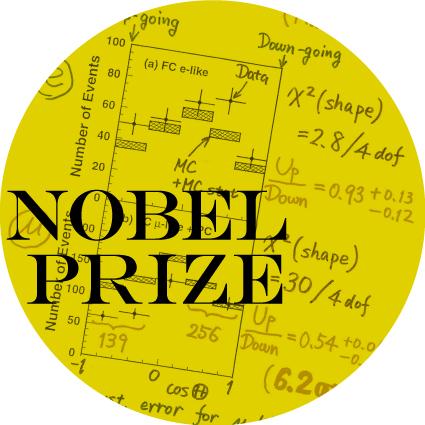 Professor Takaaki Kajita, director of the Institute for Cosmic Ray Research, the University of Tokyo, was awarded the 2015 Nobel Prize in Physics for “the discovery of neutrino oscillations, which shows that neutrinos have mass.” Neutrinos are elementary particles, which are the smallest unit constituting matter. Professor Kajita conducted research on neutrinos under the direction of Professor Masatoshi Koshiba, who was awarded the 2002 Nobel Prize in Physics. Through observations in giant underground observatories, the Kamiokande and the Super-Kamiokande, he demonstrated for the first time that neutrinos, which were thought to be massless, actually have a mass. This major historic discovery will certainly contribute to the elucidation of the principles of matter and the evolution of the universe. The experimental projects led by Professor Kajita following Professor Koshiba, are the results of advanced scientific research conducted by the University of Tokyo. This special presentation showcases the Nobel Prize medal (official replica) as well as Professor Kajita’s scientific achievements.


Profile of Professor Takaaki Kajita
Born in Higashi Matsuyama (Saitama Prefecture), Takaaki Kajita is professor and director of the Institute for Cosmic Ray Research, the University of Tokyo. After graduating from Saitama Prefectural Kawagoe High School, he specialized in Physics at the Faculty of Science of Saitama University. After graduating in 1981, he pursued his studies at the School of Science, the University of Tokyo, in the laboratory of Professor Masatoshi Koshiba (2002 Nobel Prize in Physics). In 1986, he obtained his PhD with his article Search for nucleon decays into anti-neutrino plus mesons. With the late Yoji Totsuka, his senior at the Koshiba laboratory, he then carried out research on cosmic rays. In 1988, he inferred neutrino oscillation from the observation of atmospheric neutrinos in the Kamiokande, and confirmed his hypothesis from precise measurements conducted in the Super-Kamiokande. In other words, he discovered that neutrinos have a mass, and he presented his results in an international conference in 1998. In 2015, he was awarded the Nobel Prize in Physics with Arthur B. McDonald. The prize motivation was “the discovery of neutrino oscillations, which shows that neutrinos have mass.” The same year, he was awarded the Order of Culture.

image: © Institute for Cosmic Ray Research, the University of Tokyo