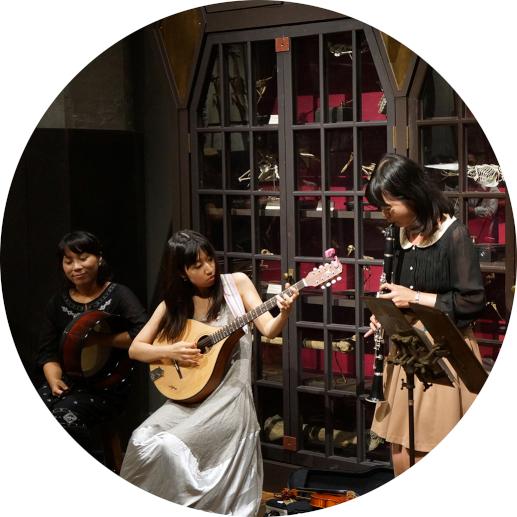 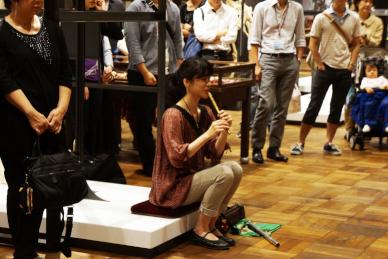 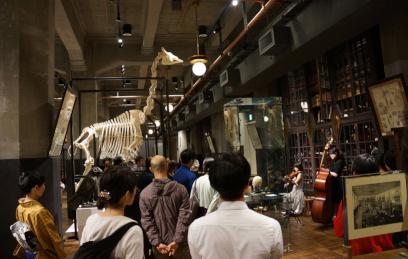 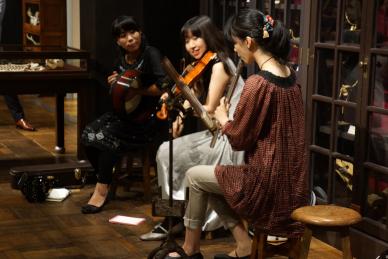 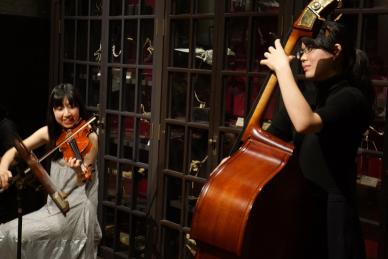 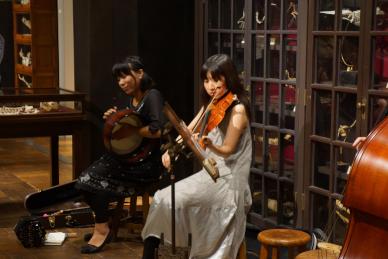 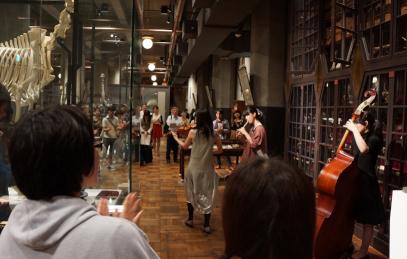 < Music & Science (3) – Sound of the Celts across the Time >
The Museum technology seminar is holding a series of mini-concerts since June 2013, as an innovative staging of the Intermediatheque’s exhibition space.
Following the Venezuelan music by whistling and guitar duet, this third edition features Celtic music especially Irish dance music by all-female band “Camel” which consists of students from Tokyo University of Arts and University of Tokyo.
Four people of whistle, fiddle, Bodhrán and double base make “Sounds of the Celts” with improvisation in autumn dusk. We are looking forward to seeing you at the museum.
(UMUT Museum technology seminar, Music event group)

< Words from Camel >
In Ireland, there was uncountable melody that was passed down orally. From this large amount of repertoire, we choose melody that is suitable for the place and repeat impromptu and we combine with other melody. A dance sometimes joins. Enjoy chattering and alcohol in an interval of the music. Someone starts performance until late at night.
The pleasure of the Irish music cannot show with a word. Whenever the music is played, connection of the melody, the tempo, and the decoration are all different, so it is chance for the players to show what they can do.
And all musical instruments function as rhythm musical instruments, and also audience can join the music with standstill and shout, so the place becomes united.
This time, we are looking forward to getting different inspiration than usual from the space of museum where the present and the past crosses.
Emi Sakai (Camel)


The third edition of our mini-concert series was dedicated to Celtic music. Celtic music is a folk music we casually hear in outdoor scenes of TV travel series, but it is rather unusual to see Celtic musical instruments or live concerts. This was a rare opportunity to experience such a performance. As the day went down the museum hall was quiet, but in the second floor, visitors formed a large ring, waiting for the apparition of the musicians.
Backed by the jaunty rhythm of Yukari Narita’s Bodhrán and Yumi Iwasato’s double bass, Emi Sakai’s fiddle and Shoko Takanashi’s Irish whistle played melody. Usually, Celtic music does not refer to scores. It is transmitted from person to person, each performer giving his own interpretation of a song. During this performance too, musicians walked, sat down on specimen stands, sometimes looking at each other, and they made music while enjoying conversation with visitors. As they watched the performers, the whole audience started smiling naturally, and began to share the music’s rhythm. Unconsciously, we tend to concentrate on the performance, but turning our gaze away from it and listening to music while facing a specimen is a particular experience. Even the specimens seemed to start dancing.
The program covers a wide range, from standards to original pieces. Takanashi, who learns composition at the graduate school, is composing original music for “Camel”. She composed a song entitled “Kari Kari Konsome” about sweets she loves. They heated up the hall with life-sized Celts music. Finally, visitors hand-clapped along the performance, the floor becoming a concert hall.
The “Music & Science” mini-concert series is organized by the UMUT Museum technology seminar’s Music event group. This time was first time that we introduced ourselves. Yusuke Kimoto learns conducting, Mei Hashimoto learns piano, and Ayaka Kuroki who is writing this article learns clarinet, each as an extra-curriculum activity. This event was planned by people sharing a musical experience. This time, on behalf of seminar students, Kuroki partly participated in an encore with a clarinet performance.
The next concert is “Komaba Memorial Cello Orchestra,” led by Yusuke Kimoto. As indicated by its name, this is an ensemble consisting exclusively of cellos. 15 cellists will gather to play Villa-Lobos’ “Bachianas Brasileiras No.1” conducted by Kimoto.  (UMUT Museum technology seminar, Music event group: Ayaka Kuroki)