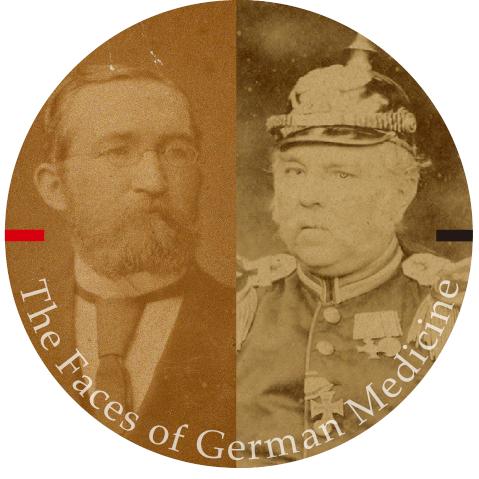 The Internal Medicine Auditorium at the University of Tokyo Hospital used to have 44 portraits of past professors of internal medicine hanging five rows high on the large wall behind the podium. Although this spectacular panorama was lost with the demolition of the Internal Medicine Research Building, the portraits became part of the collection of the University Museum, the University of Tokyo (UMUT) in 2015 as valuable scientific specimens that tell the history of the University of Tokyo. A portion of these had been on display in the special exhibition “The Face of Medicine” (December 20, 2016–February 2, 2021). Currently, 19 of the portraits from this collection can be seen in the permanent exhibition at the Intermediatheque. Among them are the three photographic portraits of Hoffmann (1837–1894), Wernich (1843–1896), and Baelz (1849–1913), German teachers of internal medicine who introduced modern Western medicine to Japan during the Meiji period. Why were photographic portraits of German teachers who taught at the University of Tokyo’s Faculty of Medicine displayed in the Internal Medicine Auditorium alongside portraits of successive Japanese professors? This is nothing but an indication of the magnitude of their contribution to the development of Japanese medicine and the depth of respect that their successors have earned for them. In addition to shedding new light on these three photographic portraits, this exhibition presents 26 portraits and related materials from the Miyake Family Collection of UMUT, formerly a modern medical family, of the German and other foreign teachers employed by the School of Medicine of the University of Tokyo who were active in the early days of Western medicine in Japan. These materials are mainly from the possession of Miyake Hiizu (1848–1938), one of Japan’s first medical doctors and a professor at the School of Medicine, who served as an interpreter for the German teachers and befriended them. Through “The Faces of German Medicine” such as Müller (1824–1893), Schultze (1840–1924), and Scriba (1848–1905), who were teachers of surgery at the University of Tokyo, as well as the above-mentioned internal medicine teachers, we will look back on a part of the history of the introduction of German medicine, which laid the foundation for the development of modern medicine in Japan. The exhibition also focuses on the cultural resources related to German medicine that remain on the campus of the University of Tokyo today, such as a stone monument (rubbed copy) in honor of Sagara Chian (1836–1906), who was instrumental in the Meiji government’s decision to introduce German medicine.