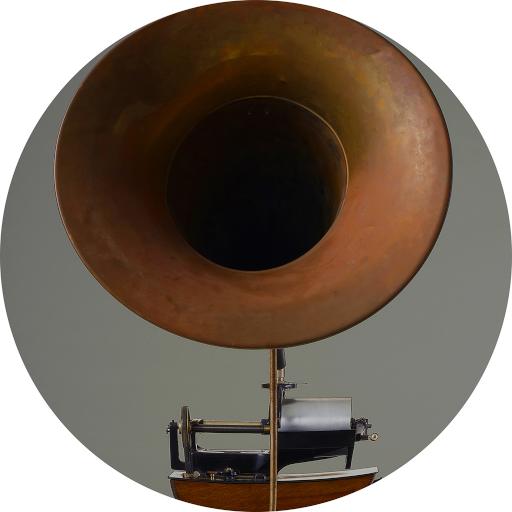 The present exhibition is the first to showcase in its entirety the gramophone collection held by the University Museum, the University of Tokyo (UMUT). This gramophone collection includes more than 80 items. They include various gramophones made in the US, the UK and Japan, covering the models conceived by Edison all the way up to later toy phonographs, making visible the genealogy of sound design that every generation since Edison has strived for.
The ancient desire of capturing human voice and reproducing it in another context became technically possible at the end of the 19th century. The first steps toward the invention of sound reproducing techniques were taken in France, with Edouard-Leon Scott de Martinville patenting his Phonautograph on March 25 1857 and Charles Cros submitting his design of the Paleophone on April 30 1877. But it is Thomas Edison (1847-1931) who gave form to a practical sound reproducing technique when he submitted his patent for the Phonograph on December 24 1877, the year following Bell’s patent for the telephone. Edison’s prototype consisted of a brass cylinder wrapped with a tin foil sheet, on which grooves were cut; two reproducers made out of mica respectively recorded and reproduced sound. Starting with the Edison Phonograph Company established on April 24 1878, and until the apparition of electric gramophones and LP turntables in the late 1940s, companies in the West and in Asia strived to mass-produce gramophones. Although Edison focused on vertical-cut records, mainly on cylinders made of wax then celluloid, Emil Berliner’s lateral-cut disc records rapidly held the major share, and were widely distributed.