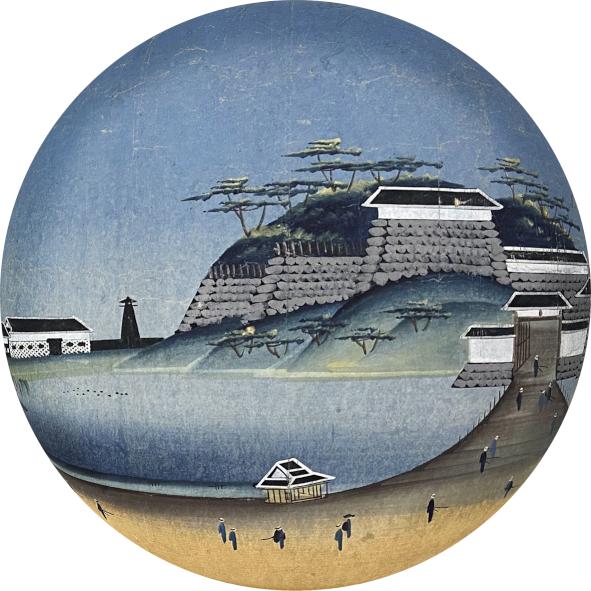 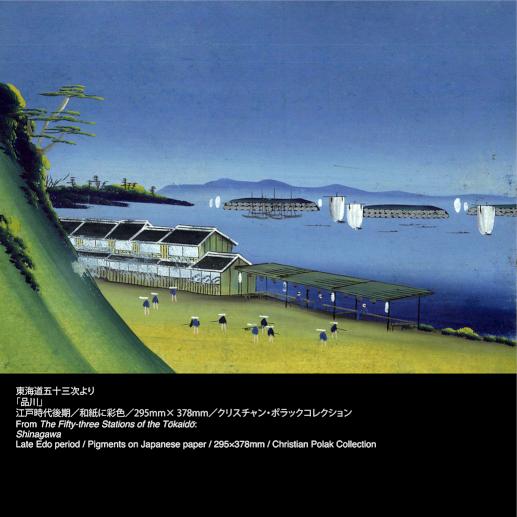 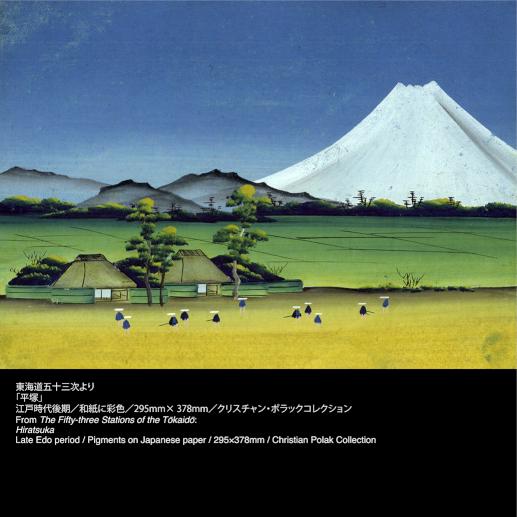 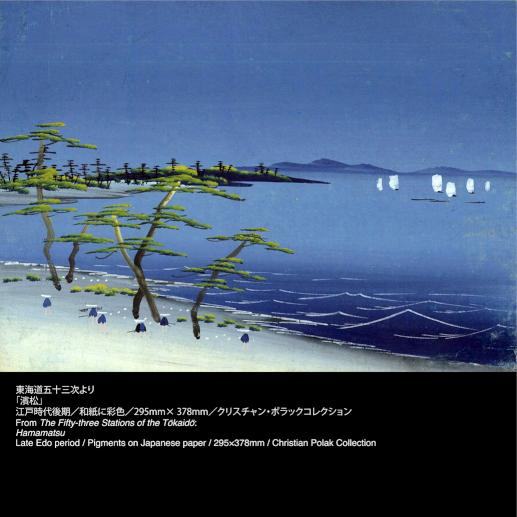 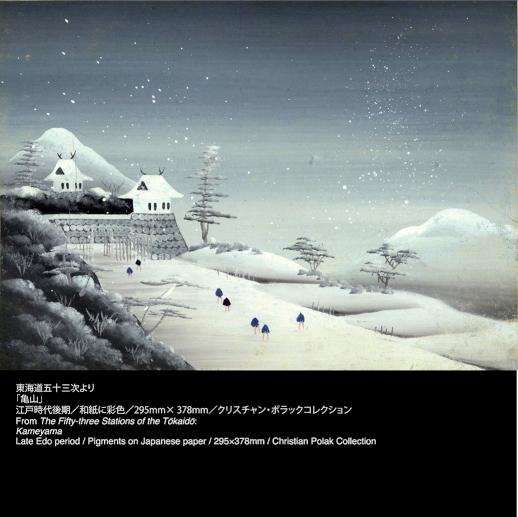 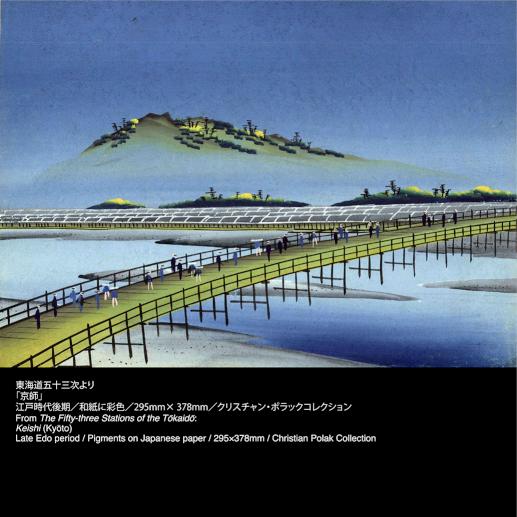 The present exhibition showcases various sceneries from the Edo period drawn from a distant viewpoint, by combining doro-e such as The Fifty-three Stations of the Tōkaidō with actual maps drawn for The Pictorial Survey Map of the Tōkaidō.

Fujioka Sakutarō (1870-1910), a Japanese literature scholar born in Kaga Province, qualified the doro-e (literally “mud pictures”) from the end of the Edo period as “backdrop paintings offering distant views.” This is a most accurate description of the Western-style paintings that constituted, along with the ukiyo-e, part of Edo-period popular culture. It is painter Kishida Ryūsei (1891-1929) who named them doro-e. They were also called gofun-e as the gofun powder made from Orient clam shells was mixed with the pigments, or shiba-e as they were mainly sold in front of Shiba Myōjin shrine. In any case, regarded as a mere gift for the populace, they were long neglected.
However, doro-e are recently being reevaluated, especially in the West, following the same trend as ukiyo-e. Within doro-e considered as a genre of Western-style painting, we distinguish the Edo-style doro-e depicting Edo sceneries, respectively from the Kamigata-style originating from Kyōto-born Maruyama Ōkyo (1733-1795)’s nozoki megane-e (“peeping glass pictures”), from the Akita-style following Satake Shozan (1748-1785) and Odano Naotake (1750-1780)’s Akita school of Western-style painting (Akita Ranga), and from the Nagasaki-style influenced by Western-style painting.
Edo-style doro-e sceneries depict feudal lords’ residences with Mount Fuji in the distance. Distant views of feudal warriors’ residences such as the Mito Tokugawa family’s main residence were often chosen as subjects, as well as the main residences of the Asano and Kuroda families outside Sakurada Gate, where the Edo Castle appears. These paintings were also often appreciated as megane-e by using peeping glasses, in which case the image was flipped horizontally. In other cases, warriors from other provinces would acquire single prints as souvenirs of their attendance of Edo castle, and the scenery would be represented without being reversed. This is the reason why both types of doro-e exist for the same scenery.
The main characteristic of doro-e is the cool and dry Prussian blue pigment occupying the whole surface. It is said that indigo pigment obtained from Asiatic dayflowers was initially used, but since the importation of blue pigment made in Prussia in the late 1820s, foreign-made chemical pigments were deemed more practical. The reason is that they suited the cheap doro-e. Pharmacologist Hiraga Gennai (1728-1780) called the pigment berein blauw, from which the word bero ai (“bero indigo”) designating the doro-e pigment is derived.
With the horizon line set low within the frame, the scenery is depicted from a bird’s-eye view according to Western one-point perspective. The buildings of the warriors’ residences are standardized, and the human figures are simplified to the point of being comparable with squids or mushrooms. Such pictorial characteristics are often found in the mass-produced work of anonymous artisans. Indeed, artists with an identifiable name are rare among the authors of doro-e. Most of them are anonymous, the only exception setting his seal on most of his works being Shibakuchi Unpa. The artist named himself after painter Shiba Kōkan (1747-1817), thus expressing his ambition as a painter.
The upper part of the works is covered with a dark indigo sky, while the horizon line is blurred in white. As with the simplified painting of Mount Fuji decorating public baths, doro-e with characteristically stereotyped forms depict the city as a concept transcending time. They can be qualified as abstract landscape painting. Such conceptual images of urban sceneries were bought by provincials upon their return from Edo. They were mainly sold in front of Shiba Myōjin shrine, along the Tōkaidō between Nihonbashi and Shinagawa. Although doro-e echoed the sensibility of the new political powers of the era hoping to rid themselves of old customs, they disappeared after the Meiji Restoration. This meant the disappearance of Edo as an eternal city.