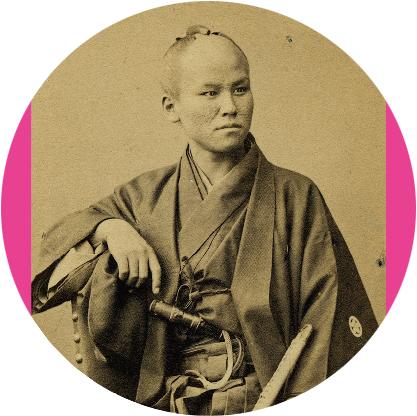 The special photographic panel exhibition, Mobilemuseum “The Dawn of Modernity – Faces of Japan Between Edo and Meiji” is held at Ueno Park (on the North side of Tokyo Bunka Kaikan), thanks to a special collaboration between the University Museum, the University of Tokyo (UMUT) and the Spring Festival in Tokyo Organization Committee. To coincide with this outdoors exhibition, the Intermediatheque offers a special presentation of the original photographic prints from the late Edo and early Meiji periods.

In total, a mere 20 photographs, mostly the size of a carte de visite, developed on albumen prints having faded with time. However, these photographs crystallize, in the most direct form, the appearance of people who lived on the isolated archipelago of the Far East between the end of the Shogunate and the beginning of Meiji era. To borrow the title of Nadar’s famous album, this is nothing less than a Contemporary Gallery of Meiji Restoration Japan.
In these photographs people of varying age appear, from children to elderly men. Along with the Emperor, then revered as a divinity, the Tokugawa shōgun leading the military society, the lords sent to Europe to represent the shogunate, the officials and the interpreters, as well as foreigners established in Japan, various social strata are represented, with anonymous people, mothers with their children, merchants and workers.
Once in the studio, whether they stand in front of a drop curtain or sit on a chair, whether they are officials or private individuals, the reasons behind these people exposing themselves to the camera vary. However, in every single photograph, a similar tension enveloping the subject’s body is perceptible, as well as a certain perplexity in their stare. They express the complex feelings people then felt when facing this unfamiliar optical recording device. Modern civilization infiltrated traditional society, independently of individuals’ will. Here are the faces of such people confronting this invisible pressure.
Western people developed a stereotype of Japan full of shōgun, samurai and geisha based on photographs and paintings. Today, this image of Japanese people is still dominant abroad. Such images, once imprinted on our memories, cannot easily be erased.
These photographs recording the many faces of this era long lost convey the visual reality of Japan under Meiji Restoration, both reserved and lavish.