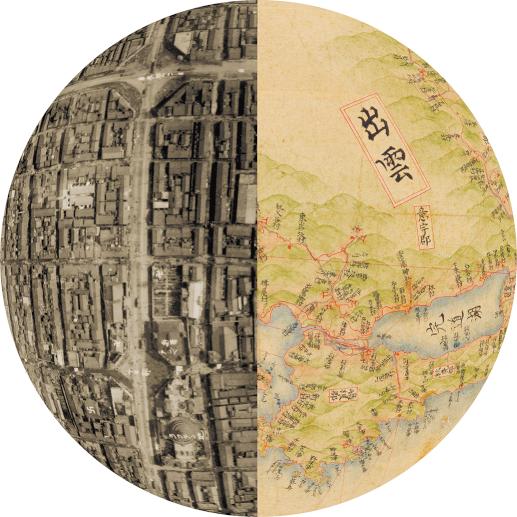 Among the treasures of the University of Tokyo, there is the Medium-Sized Map of the Map of Great Japan’s Coastal Areas in eight volumes, based on Tadataka Ino (1745-1818)’s measurements. Unfortunately, the volume on the Kanto region is still lost, and the map long remained incomplete. Because of this background, in the 1990s when digital image-processing techniques made rapid strides, a first pioneering digitization was made. By replacing the lost volume on the Kanto region with another version of the Medium-Sized Ino Map, a digital reconstitution of the entire map was realized.
Now that digital image-processing techniques have become familiar, we have further accumulated digital data of the Large-Sized Ino Map, of various alternative versions of the Medium-Sized Ino Map, of historical preparatory sketches, as well as of the Government-Published Survey Map of Japan, which was produced on the basis of the aforementioned versions. As a result, comparative research on geodetic methodology, on mapping accuracy, on cartography and on transcription techniques has made significant progress.
At the University Museum, where we have established Globalbase, a synthetic database centered on modern maps, as a pillar of our museum activities, we have taken this opportunity to reconsider the historical development of cartography, from modern mapping techniques after the Ino Map all the way to contemporary remote-sensing technologies, which have made possible digital maps based on aerial and satellite photography.

Perhaps you once dreamed you could fly. Surely many of us can recall having had such dreams as children. Yet, when we become adults, we learn to comprehend the world and discern reality, and as a result, these dreams gradually fade away. Alternatively, as the modern era has given us the airplane, flying is perceived as commonplace and therefore uninteresting. However, some people never stopped dreaming such dreams.
To fly and to pursue the dream of flying are similar, yet different. When we consider people who have flown, we might remember the Wright brothers (1867-1912, 1871-1948) or Lindbergh (1902-1974), among others. When we consider people who dreamed of flying, the Cassini family, Tadataka Ino (1745-1818), and other famous cartographers come to mind, who attempted to provide scientific insights and methodologies to view the distant contours of the Earth far below as their spirits soared higher than any airplane.
To understand the dimensions of the Earth, Tadataka Ino walked the highways to complete his atlas of Japan. Considering the process of creation from this perspective, these maps display urban areas on the Earth’s surface, thus resembling the nocturnal images of the Japanese archipelago captured by the man-made NOAA (National Oceanic and Atmospheric Administration USA) satellites. Giovanni Cassini (1625-1712) provided telescopes to Catholic priests leaving France to travel the world and plotted a vast map based on the longitudinal and latitudinal measurements they provided at each location. Although this map has since been lost, we can confidently assume it must have appeared like the NOAA nighttime satellite images of cities in Africa and Asia. Though these cartographers never flew in the literal sense like Lindbergh, they perceived the world illuminated through the lens of “geodetic surveys.”
In modern times, geodetic survey technology such as “remote sensing” that employs airplanes and man-made satellites have increased. It is now possible to visualize the contours of the Earth as perceived by Tadataka Ino, other cartographers, and modern remote sensing through valuable documents and image data preserved at various locations such as the University of Tokyo.