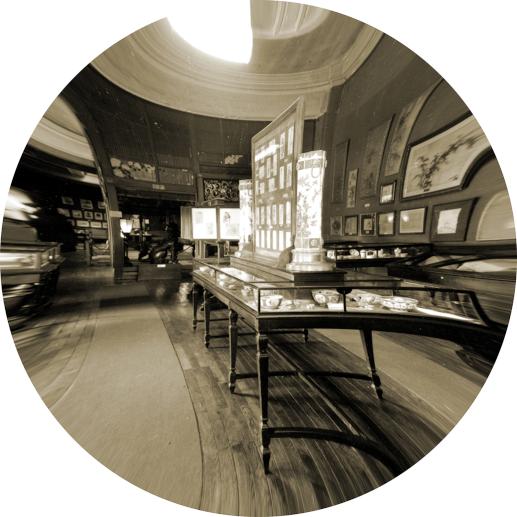 The University Museum, the University of Tokyo (UMUT) has received in donation from the city of Lyon in France six antique showcases related to Émile Guimet (1836-1918), famous as a collector of Asian art. On this occasion, the exhibition room “First Sight” has been refurbished as the Guimet Room to open the permanent exhibition Small Chamber of Curiosities. Guimet was an entrepreneur who made a fortune industrializing ultramarine pigment, and is also known as a collector of extra-European art ranging from the Orient to East Asia. His heritage is now mainly divided between the Musée Guimet in Paris and the Musée des Confluences in Lyon. The large showcases established in the Guimet Room were specially ordered more than a century ago for the Guimet Museum in Lyon. It is said that the appreciation of objects through a glass window started with World Fairs. The showcases ordered by Guimet are an example of such furniture heralding the age of transparent glass. Furthermore, they were made in a pseudo-Asian style in order to exhibit items from East Asian civilizations. They thus have a particular value as a heritage of Japonism in France. In these showcases made to exhibit East Asian antiques, we now present to the public a carefully selected collection of scientific specimens ranging from Natural History to Cultural History. The loan of artworks in the context of exhibitions has become excessively common. However, rarely do cases containing these artworks become the object of such exchanges, beyond geographical and historical borders. These showcases made in France to exhibit art from Far East Asia have been brought to Japan, and given a second life as exhibition furniture for the 21st Century. Here, the scientific exchange between France and Japan ranging over three centuries has taken shape in a public form.